and the lively past of Camp Reinsehlen

Why to book with us?

1938 the German air force claimed the area around Reinsehlen to establish a military airfield, for which a 250-ha area was assigned. The airfield was used for both training and operation. It had the code name "Posemuckel".
In 1945 during the final phase the war on the first newly developed subsonic jet planes were stationed at the airfield. On April 7 1945 a US bomber fleet numbering over 1,000 planes entered German airspace to destroy the remaining military targets ...

However, as the sky was tightly covered with clouds, the Reinsehlen airfield could not be localised.
In 1946, the premises were turned into refugee camps für people from the East German areas. During 4 years as a refugee camp from 1946 to 1950, approximately 1,500 people lived there on average, where this was one of the greatest institutions of its kind in Northern Germany. In addition, a hospital with about 150 beds was established in the former officers' quarters.

After the refugee camp was closed in 1950, the British and Canadian forces used the area under the name "Reinsehlen Camp" as starting point and base camp for tank military excercises in the Lueneburg Heath. As Germany was reunited in 1990, the British forces left Camp Reinsehlen in 1994.
After they left, renaturalization work started in the area to repair the substantial damage to the environment.
There were several concepts for civil use. A group of artists from Schneverdingen suggested the establishment a peace park as an Expo 2000 project. This plan as well as other ideas for a business park were dismissed.
Today the Alfred Toepfer Akademie für Naturschutz and our hotel restaurant share one of the former military buildings on the area.

(This text was originally composed in German language and as such based on the text Camp Reinsehlen (and on the English version "Reinsehlen Camp") from the free encyclopedia Wikipedia and is available under the double licence Creative Commons CC-BY-SA 3.0 Unported  (short version (de).
The List of authors is available in Wikipedia.

(This text was originally composed in German language and as such based on the text Magerrasen from the free encyclopediaWikipedia and is available under the double licence Creative Commons CC-BY-SA 3.0 Unported  (short version (de). The List of authors is available in Wikipedia.

The skylark is a special bird that can be observed around Camp very frequently.
It lives in cultivation, heath, natural steppe and other open habitats of all kinds with low vegetation and in Central Europe it is mostly bound to agriculturally used areas. Depending on the geographic distribution, the species is a resident to short-distance migrant.

The skylark is a breeding bird that is seen very often in Europe, and is considered not to be an endangered species despite considerably reduced numbers in parts of the geographic range.

(This text was originally composed in German language and as such based on the text Feldlerche from the free encyclopedia Wikipedia and is available under the double licence Creative Commons CC-BY-SA 3.0 Unported  (short version (de). The List of authors is available in Wikipedia. Image source: Daniel Pettersson. This file is licenced under the Creative-Commons licence„Credits – Share Alike 2.5 Sweden“.

Moorland sheep are a very undemanding sheep species.
The German name "Heidschnucke" is composed of the words "Heath" (Heide) and "Schnucke", which literally means to nibble.

The hair of the gray cornuted moorland sheep is grayish and extremely long; legs, tail and head are black, the lambs are born black and get their colour in their second year. However, there are also white versions. Both sexes have cornets.

The moorland sheep are the conservers of our countryside. With their browsing of young copses and grass they keep the heath short and the low-nutrient soil is preserved.

Withouth the help of moorland sheep the largest calluna heath areas in Central Europe could not be preserved.

The Dalai Lama at Camp Reinsehlen's

In autumn 1998, the 14th Dalai Lama stayed at the Camp Reinsehlen and the vicinity of Schneverdingen for ten days for the "Buddhas path to happiness" event.
The event was organised by the "Tibetisches Zentrum Hamburg" (Tibet Center Hamburg).

Within a month, experts erected a tent village with a surface area of 25,000 m2. This size was unique in Europe until then. Different sources in the internet reported up to 11,000 people from 56 countries attending the Camp Reinsehlen in those days. 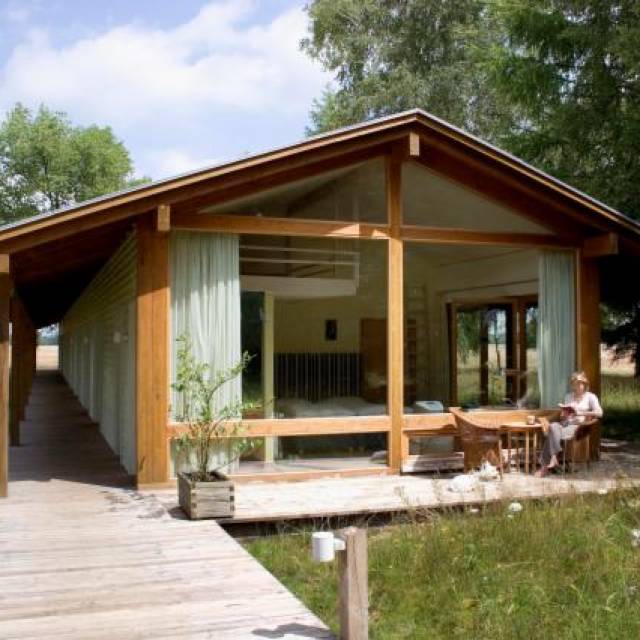